“A gruffalo? What’s a gruffalo?”“A gruffalo! Why, didn’t you know?”
“He has terrible tusks, and terrible claws, and terrible teeth in his terrible jaws…
He has knobbly knees, and turned-out toes, and a poisonous wart at the end of his nose…
His eyes are orange, his tongue is black; he has purple prickles all over his back.”

‘The Gruffalo’ by Julia Donaldson with Axel Scheffler’s glorious illustrations is one of Nicholas’ favourite books. When we finish reading it (usually for the third or fourth time in a row), Nicholas will often say he wants to eat the gruffalo. Today I thought I’d help him do just that! 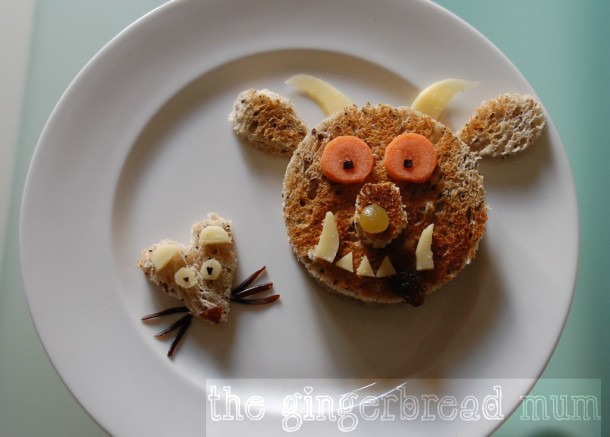 The gruffalo is a toasted ham and cheese sandwich with extra bits of toast for his ears. His terrible tusks, teeth and horns are cut from cheddar cheese. His orange eyes are carrot disks with chocolate chip pupils (you could also use small pieces of raisin or licorice). The poisonous wart on the end of his nose (an extra bit of toast) is a fruit button (you could also use a piece of grape or even a cooked pea). His black tongue is a raisin.

And I couldn’t leave out the little brave mouse. I cut out a heart shape from another piece of toast then cut out cheese for his ears and eyes, and added small chocolate chips for his pupils. His nose is a flattened raisin cut into a triangle, and his whiskers are licorice laces cut into thinner strips.

Nicholas had lots of fun eating the gruffalo!

What books do your little ones want to read over and over again? Could you turn them into a cute lunch?