If you love bread then you must check out my friend Barbara’s blog, Bread and Companatico, whose passion for baking bread and its accompaniments is infectious.

These bread rolls really are the simplest thing I’ve ever baked and (very-critical-when-it-comes-to-food) hubby was amazed at the taste saying they were the best homemade bread he’d ever tasted. Not bad for something that basically makes itself! 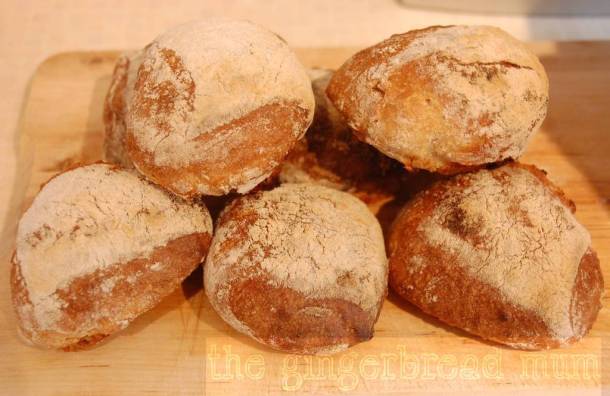 While this recipe is simple as well as quick to cook, it does take a lot of time for the dough to rise (once overnight and another 45 minutes the next day). I didn’t think I’d be able to emulate Barbara and make these for breakfast (I love freshly baked bread, but getting up an hour earlier just to get these on the table?). But thanks to hubby having an extended lie in with Nicholas Sunday morning, I did manage it. Hurray!

I’ve also made these adding 30g each of pumpkin and sesame seeds. I liked the different texture through the bread, but I felt the seeds took away from the wonderful flavour of the bread.

Take a look at Barbara’s step-by-step photos if you’re unsure of any step.

In a large mixing bowl, dissolve the yeast in the water then add the rest of the ingredients except for the extra plain flour. Mix together (it’s easier with your hands) until combined.

Cover the bowl (Barbara has a great suggestion of using a dinner plate) and leave at room temperature overnight.

The next morning the dough should look bubbly in texture and at least doubled in size.

Tip out the dough onto a heavily floured surface. Take each of the four ‘sides’ one by one, stretch and fold each back into the centre of the dough.

Cover with the mixing bowl and leave for 45 minutes to rise again.

While you’re waiting, preheat the oven to 250C and line a baking tray with baking paper.

After 45 minutes, uncover (it should have grown again) and sprinkle with plain flour.

Without moving the dough, cut into eight pieces. Carefully transfer them to the baking tray (I found it easier to use the knife to scrape underneath the dough to take it off the work surface, then delicately tip the piece of dough from the knife to my other hand and finally on the tray).

Bake for 15 minutes then reduce the temperature to 210C and bake for another 5 minutes. To test if they’re cooked, tap the bottom and you’ll hear a hollow sound if they’re done.

Have you ever tried baking bread?