Week two of the Great British Bake Off was all about biscuits and this was the perfect excuse for me to revisit making savoury crackers.

I don’t make these Wholemeal Wheat Thins nearly enough, especially when we’re all big cracker fans, and since I first made them I’ve wanted to try adapting the recipe to use olive oil instead of butter to be a bit healthier.

I’ve made these crackers using both fresh and frozen spinach with the same great result. If you’re using frozen spinach, run it under cold water for a minute or two to defrost and then squeeze as much liquid out as you can before putting it into your food processor.

The preparation is super quick and easy – just throw everything into your food processor! What will take up most of your preparation time is rolling and cutting. 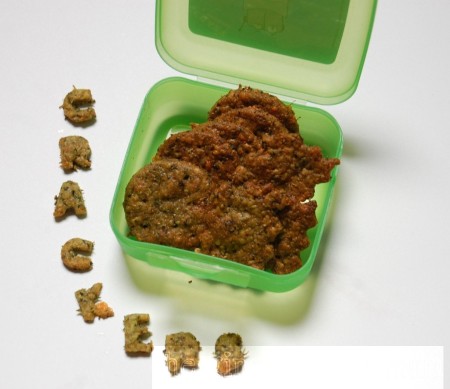 The secret to getting a lovely crisp cracker is to roll out the dough as thinly as possible (2-3mm is ideal).

Nicholas and I had lots of fun cutting out different shapes – small letters, circles and wavy rectangles. Small fiddly shapes can be time-consuming (although kids will love them), but even cutting random straight lines across the dough will give you some fun shapes.

If you get sick of rolling and cutting, the dough freezes very well!

Prep time: 15-20 mins
Cook time: 5-10 mins (depending on the size of the crackers)
Makes about 120 Ritz-size crackers
Store in an airtight container for up to a week

Heat the oven to 200C and line an oven tray with baking paper.

Put the spinach into a food processor and blend until evenly broken up.

Add the rest of the ingredients and blend until the mixture comes together into a ball.

Take the dough out of the processor and divide it in half. Roll out one half of the dough as thinly as you can (I put the dough between two pieces of cling film to avoid it sticking to the bench or rolling pin, which saves on cleaning up time!). The thinner you can roll it, the crisper your thins will be.

Cut out shapes using a cookie cutters or a pastry wheel.

Place the shapes close together on your prepared tray and use a skewer or toothpick to poke some holes into each one to stop them puffing up.

Bake for 7 – 10 mins until golden brown and crisp (keep a close eye on them as they cook quickly).

Tip: if your stored crackers start getting soft, pop them back into the oven to crisp up for a couple of minutes.

To join in the Great Bloggers Bake Off or to see the other baking efforts, visit Mummy Mishaps.