Third birthday and a dinosaur adventure

I really enjoyed spending Nicholas’ third birthday just the three of us (and his party was 6 days later so my stress levels were still rather low!).

Hubby and I blew up lots of balloons and put them in Nicholas’ room while he was sleeping the night before so he’d have a lovely surprise when he woke up. Well that was my nice thought. Last year we left just 3 or 4 balloons and he got very excited. This year was another story.

We woke up to Nicholas making strange angry sounds and found him sitting on his bed looking very annoyed at all the balloons filling up his bedroom floor. Ok, I should have taken into account his need (typical for kids his age) for things not to change, especially in his room! Oh well…

To lighten the mood and get back on track with the festivities, he opened his main present from us before breakfast.

I continued the birthday tradition we started last year of pancakes and icecream with candles for breakfast, this year incorporating his adoration of blue. I made pancakes with a little blue food colouring a couple of days before and put them in the freezer so I could have a relaxed morning too (pancakes freeze wonderfully!).

Then we headed into London to the Natural History Museum to look at dinosaurs. Nicholas was both excited and a bit nervous about seeing dinosaurs (I wish I could have gotten into his brain to see what he was anticipating), but as we queued, one of the museum workers did a wonderful job telling him all about the first dinosaur he’d see as soon as we went in – Dippy the diplodocus. 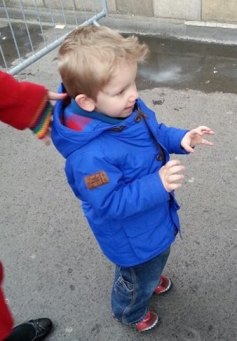 We had a wonderful afternoon and Nicholas enjoyed himself immensely, even comforting a boy, probably more or less his own age, who was crying after seeing the big animatronic T.Rex.

To finish the day, Nicholas was very happy to have his much requested blue chocolate cake (although I think he would have been just as happy with the bowl of blue chocolate ganache!).

Happy birthday to my gorgeous boy!