I was lucky enough to be sent the Stone Earth Pan by Ozeri to try and have been using it as my only frying pan for the last month. 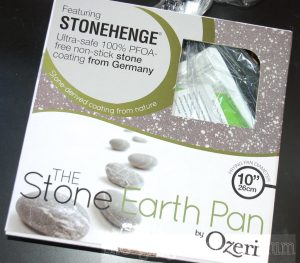 The pan utilises a natural stone-derived coating from Germany called Stonehenge making it one of the world’s first frying pans to combine non-stick perfection with being absolutely free of toxic substances such as PFOA (PerFluorooctanoic Acid), a harmful chemical often found in traditional cookware.

The eco-friendly pan is made from  heavy-gauge die-cast aluminum and has a magnetized base so it can also be used on induction stoves. The comfortable handle is coated in heat-resistant silicon and solidly attached to the pan.

I’ve been very impressed by the Stone Earth Pan. It’s a lovely solid pan without being too heavy that heats quickly and perfectly evenly as its advertising claims. My pan is the middle size in the range (26cm/10″), and is small compared to most of my other frying pans, but its unusually high sides means you can cook a surprisingly good amount in it.

The instructions recommend always having an initial thin film of oil in the pan before cooking. This has worked perfectly for me, but I’ve also cooked bacon, sausages and pancakes without using any oil or butter and the non-stick surface has stilled worked like a dream. 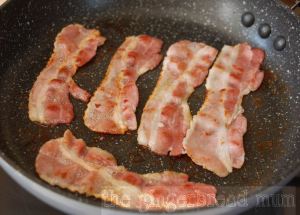 Cleaning has also been a dream. Unfortunately it’s not recommended to put the pan in the dishwasher. However, even after a month of fairly constant use it only needs a quick wipe with a soapy sponge. Even after cooking my Asian-style salmon whose sticky honey marinade always leaves my other pans needing a soak and then serious scrubbing, the Stone Earth Pan just needed a quick soapy wipe down! 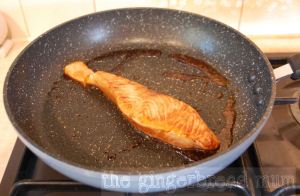 The Stone Earth Pan also comes with a fabulous free pan protector, made from thick felt, enabling you to store other pots and pans on top of it without its non-stick surface getting damaged. This is a brilliant extra and it made me wonder why other pan manufacturers don’t do this.

I’m now a huge fan of Ozeri and their Stone Earth Pans and the best thing is, unlike other top quality pans, they don’t cost the earth!

Disclosure: I was sent the Ozeri Stone Earth Pan to review. My opinions are honest and my own.