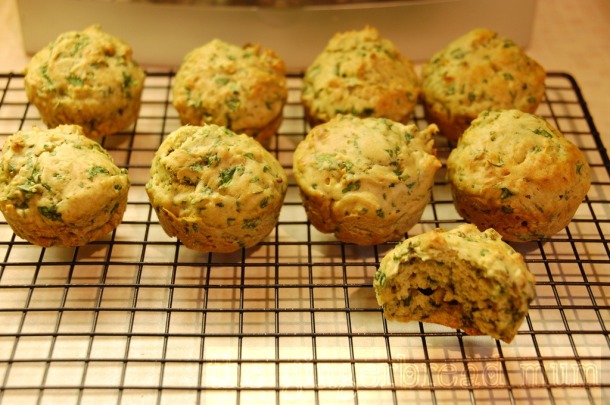 Yes, you read correctly, spinach muffins. And they’re sweet. I’ll let you have a minute to get your head around that.

Still can’t imagine what they’d taste like? Don’t worry, neither could I when I came across the recipe by Weelicious. I’m still on my mission to get more vegetables into Nicholas, so I thought I’d continue my attack from a sweet angle too.

I’ve made two batches of these now, modifying the original recipe both times. Honestly, they’re a strange taste sensation and I certainly won’t be waking up any time soon thinking ‘Mmmm, I fancy a spinach muffin.’ But I made them for Nicholas not me.

Reading the numerous comments for the original recipe, many people who’ve made them say you can’t taste the spinach and that they taste like plain vanilla muffins. For me the spinach taste is strong, and its metallic flavour in combination with the vanilla is probably what confuses my taste buds. But I made them for Nicholas not me.

The original recipe has applesauce and sugar. I replaced the sugar with honey to be healthier (I honestly can’t see the point in packing a muffin with spinach goodness if you then add sugar, sorry). I also left out the salt, as just reading that in the ingredient list made my taste buds apprehensive, and again why add it to your munchkin’s food if you probably don’t need to (after tasting them I think adding the salt would make the clash between sweet and savoury too much).

For my second batch I also left out the baking soda (bicarbonate of soda) as I really don’t like the taste of it in muffins. It didn’t affect the texture and the taste was better. Yes, for me, but I made them for Nicholas not me!

Nicholas has eaten them but without gusto, however he hasn’t been completely well this week. We’re going to the joint first birthday party of Nicholas’ best friend at the weekend. It’s a party with all the babies from his antenatal group, so I will go armed with my spinach muffins and see how they go down with a pack of one-year-olds. 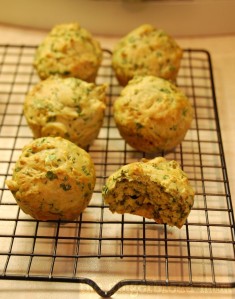 Preheat oven to 175C and grease your muffin tin with a little vegetable oil.

Put the spinach, applesauce, egg, vanilla, honey and vegetable oil in a food processor, and puree until the spinach has broken up into small pieces and the mixture has combined.

Sift the flour and baking powder into a medium-sized bowl.

Pour the spinach mixture into a large bowl and carefully fold in the flour mixture, mixing just enough to combine the ingredients (mixing too much will make your muffins heavy).

Divide your mixture evenly between the 12 muffin holes. 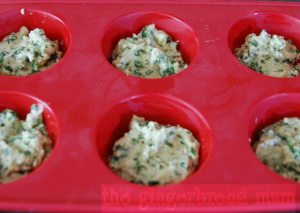 Bake for 12-15 mins until a skewer comes out clean.