I’m very lucky not to have a fussy eater. Nicholas not wanting to eat is usually a sign he’s not feeling well. However he has a mixed response to berries. Strawberries were amongst the first fruit he ate and he loved them (I read after that the recommendation is to introduce them to babies later), but after a few months he started spitting them out even when I mixed them in other things. I now mush them up as much as I can and put them in yogurt and he’s ok. He likes blueberries and loves squeezing blackberries. Is it just a boy-thing wanting to squeeze stuff? He grits his teeth and strains with the effort of testing his strength. Food is the most fun to squeeze because all the juice comes out down your hand and arm and papa’ says ‘Why are you making all that mess?! Don’t do that!’ It’s so much fun! 😉

Anyway, back to eating berries. I wanted to make Nicholas something with berries for dessert apart from just mushing them up into yogurt. I thought why not add them to a simple bread pudding; their sweetness plus some honey would mean I could leave out the sugar. And the great thing about bread pudding is that it can also be served cold, cut into fingers for a snack or even for breakfast. It also freezes well and it’s a great way to use up stale bread. 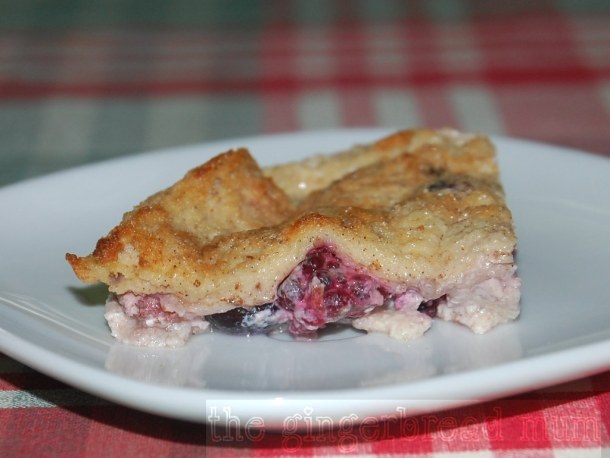 This really is a dessert for the whole family and you can use pretty much any fruit you have on hand. For babies, use fruit they’ve already been introduced to. Mashed banana or grated apple would work well. A grated sweet apple or some applesauce/apple puree adds more sweetness if you think the fruit you’re using isn’t sweet enough. Sultanas and raisins are also a great addition, but they need to be softened for babies (soak them in warm water for about half an hour before adding them).

I used a small casserole dish and cut my bread in half diagonally to spread it over the bottom of the dish a bit more. You could also make individual puddings in ovenproof ramekins. You need the bread to soak in the custard mixture to get all soft and gooey so choose a dish not much bigger than your bread slices. 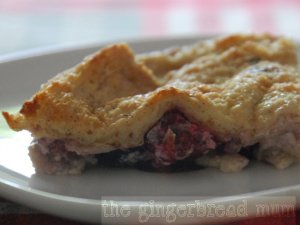 Butter a small ovenproof dish and lay one slice of bread in the bottom. Sprinkle the berries over the bread and then sprinkle over the cinnamon. Top with the second slice of bread.

Lightly beat the egg, milk, vanilla and honey together. Slowly pour over the bread soaking it all over. Leave to rest for about 30 mins for the bread to soak up the liquid (or overnight). 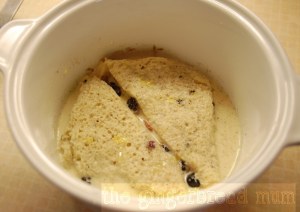 Cook at 170C for 30-40 mins until the egg mixture has set (you’ll still have some liquid from the berries) and the top is a light golden brown. 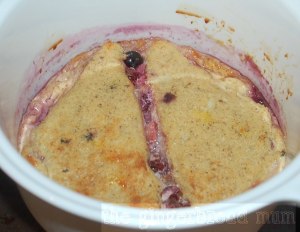 Tip: use the leftover bread crusts for French toast skinny fingers or toast them to dip into hummus as a snack. If you’re not going to use the crusts immediately, just pop them in a bag and freeze them for later.

A very quick post before we load up the car and spend the Jubilee long weekend abroad. Our spell of hot sunny weather has finished here in the UK, but hopefully it will soon return and this is another recipe that’s perfect for hot days, and not just for your munchkins. 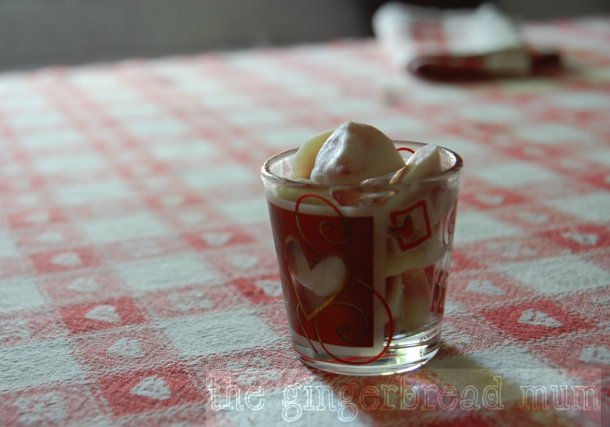 I came across this simple idea on Pinterest (how I love Pinterest!) but unfortunately there was no link. It is, however, very easy to figure out. Use whole strawberries for adults and quartered strawberries for little ones. I’ve also seen (yes, still on Pinterest) blueberries pierced on bamboo skewers, so you have blueberry ‘kebabs’, dipped in yogurt and frozen. Yum! You could try sliced bananas, raspberries, let your imagination go wild!

Dip quartered strawberries into plain yogurt (the thicker set yogurt is best simply because you get a good coating). 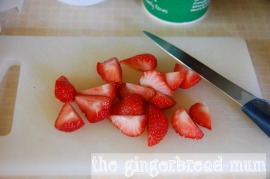 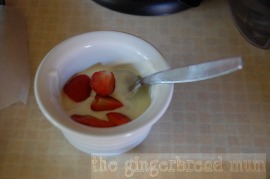 Place on a tray lined with baking paper that you can fit in the freezer. 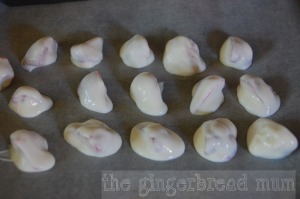 Put in the freezer for a few hours until the yogurt has frozen.

How do you keep your little one cool in the hot weather?